In the 1850’s a man by the name of Josiah French willed an amount of land to the Town of Braintree. His will stated that the land “be used and occupied by the said Town as a common or common field for companies and buildings for Town of public business, but no private dwelling houses or buildings whatever to be placed on said premises, but to be forever French’s Common…” To this day French’s Common has been used only for acceptable purposes as outlined in French’s will. 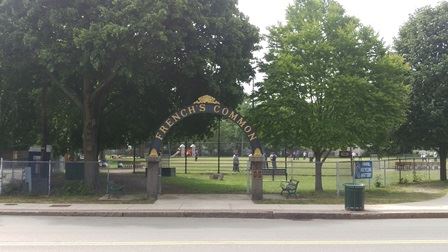 Town Hall stands on the northern edge of the Common and for decades the field has been used for baseball games and other recreational activities. The Common remains the center for baseball activity in Braintree. The iron archway entrance to the field was constructed in 1880, designed by Smith and Lovett. The field also served as drilling grounds for the Braintree Guards Association during World War I.