In 1857, after the separation of church and town affairs had been made, plans were developed for a new town house that would also house a high school. The location for this new town house was to be at the northern corner of French’s Common, the location where Town Hall stands today. Boston architect John D. Towle was hired to design the building. The building had a wooden frame, a slate roof, and copper gutters. 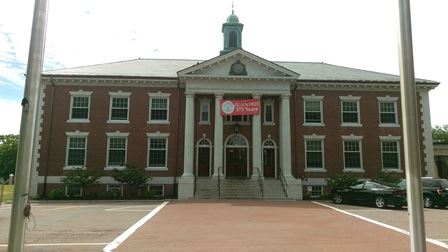 The Georgian style building was completed and dedicated in 1858. In 1892 the high school was moved out to make room for town offices. A year later the building was wired for electricity. In 1910, $1,500 was spent on a vault to keep town records safe. This was a smart investment, considering that a year later, on July 20, 1911 the Town Hall was destroyed by a fire that began in the attic. Many town records were saved from the fire, but unfortunately not all were.

A new Town Hall was immediately planned for construction at the same location. The new building would be designed by E Edgar Norris and Ingram &Hopkins Associates. The new Georgian style structure was this time build from brick and cast stone, rather than wood. Notable feature of this new building included the grand entrance steps as well as the large stone columns in the front of the building. Offices and meeting rooms occupied both floors and the Hall also boasted a fully equipped auditorium, banquet hall, and smoking room. The building was completed and dedicated in 1913. This building still stands as Braintree’s Town Hall today, at 1 John F. Kennedy Memorial Drive. The Hall continues to serve as the center for Town affairs.